Communism in the western hemisphere 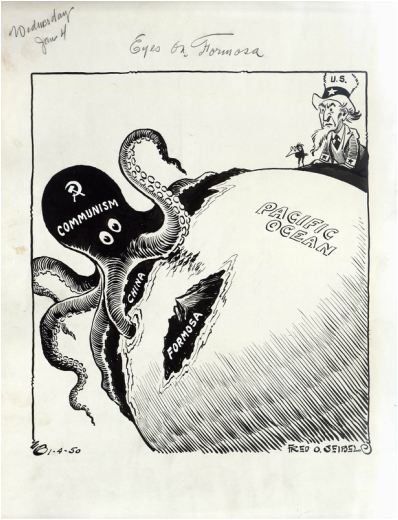 Upon the election of JFK, Nikita Khrushchev, the premier chairman of the Soviet Union, sent a telegram of congratulations to the new president.   John F. Kennedy cordially responded to the chairman and both leaders looked forward to continuing an uneasy peace that had been established at the end of World War II.  However, tension between the United States and the Soviet Union had been festering in 1960. The Soviets had shot down an American spy plane over Russia just months before the election.  The progress that had been made to ease Cold War tensions,  by Khrushchev and Eisenhower,  were a memory by the time John F. Kennedy assumed the office of the presidency.  Instead, the wary Soviet leader believed the new leader of the free world was a boy without the knowledge or the experience to match the progressive Soviets.  The two leaders would soon have a face to face meeting in Vienna that would, in the eyes of Nikita Khrushchev, confirm his belief that John F. Kennedy was “very inexperienced, even immature [...] the youthful Kennedy was 'too intelligent and too weak.'  to handle global issues successfully." With a very low opinion of the leader of the free world, Khrushchev proceeded to erect the Berlin Wall and make plans to place nuclear missiles in Cuba (Thrall).  The communist threat was 90 miles from the door of the United States of America.  As John F. Kennedy had done many times in his past, he recognized communism as one of the greatest threats that America was facing at the time, and took actions to eliminate the controversial ideology from taking root in America as well as the other American countries in the Western Hemisphere.
John F. Kennedy had traveled abroad in his youth. Interested in foreign governments and their administrations, he wrote a book entitled Why England Slept, which examined the failures of the British government as Germany threatened Europe at the onset of World War II.  When the United States entered the war in December of 1941, Kennedy served heroically, earning a purple heart - the Navy's highest honor.  Upon his return to the United States and the untimely, tragic death of his older brother Joe,  JFK pursued politics and was elected to the House of Representatives, as a Congressman for the state of his youth, Massachusetts.  Early in JFK's career he recognized the threat of the communist rule in post war politics.  He urged the people of the United States to not overlook the encroachment of the ideology that so was different than that of the United States.  As a Congressman and as a Senator of the United States John F. Kennedy continually warned the government, and the public, about the actions of the communists at home and abroad. The communist powers are powerful, "unrelenting and implacable who seeks to dominate the world by subversion and conspiracy" (Kennedy 1952).  As a legislator John F. Kennedy believed he could curtail the advancement of communism in the Unites States and in the western hemisphere.
Immediately after the election of 1960, John F. Kennedy was faced with a  crisis in Cuba.  The Cuban revolution has resulted in the installation of a pro-communist leader, Fidel Castro, who sought aid and advice from the Soviets to further his political goals.  An anti-American revolutionary,  Castro had brought the communist threat within 90 miles of the United States.  Measures were taken by Kennedy and the United States government to negate this threat so close to the borders of America. However, those plans, the Bay of Pigs Invasion, Operation Mongoose, and  many other assassination attempts, either failed miserably or were not acted upon.  As a result,  Khrushchev felt empowered to advance communism in the western hemisphere under the guise of  "protecting free people" from the United States of America.
Communism threatened to take hold in any country that suffered economic, social, and political unrest.  The Latin American countries of the western hemisphere were ripe with discontent and instability and therefore a perfect breeding ground for the communist party.  As a politician JFK battled communism throughout world, however, he worked tirelessly to keep communism out of the western hemisphere where it could potentially threaten the livelihoods of the American public.
Rebecca Ascoli
The Kennedy Presidency:  Gilder Lehrman Institute of American History